The Seckin Endometriosis Center is determined to be here for you during the COVID-19 Pandemic and Beyond. We are now offering Telemedicine Consultations. 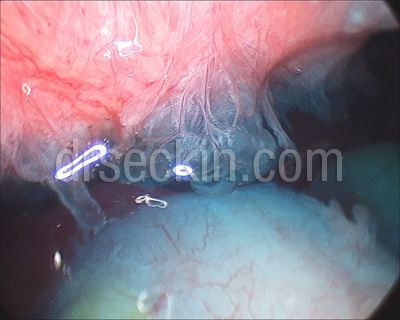 Endometriosis happens when tissue normally found inside the uterus grows in other parts of the body. It may attach to the ovaries, fallopian tubes, the exterior of the uterus, the bowel, or other internal parts. As hormones change during the menstrual cycle, this tissue breaks down and may cause painful adhesions, or scar tissue. More than 5.5 million American women have symptoms of endometriosis.

Several reasons.
There’s the taboo that still exists against anything involving a woman’s menstrual period; the exhaustion of being repeated- ly misdiagnosed; the stigma of always being sick—the list goes on, and it will be discussed in greater detail in subsequent chapters.
So what is endometriosis? My description will be simple and com- prehensive, so much so that any person, even those who are ignorant about how the female body works, will understand it.
Endometriosis is defined as the presence of endometrial-like tissue outside of the uterine cavity. By “endometrial-like tissue,” I mean tissue that greatly resembles the endometrium, which is the interior lining of the uterus that grows every month to prepare the uterus for the implanta- tion of a fertilized egg. Endometriosis causes pelvic pain in reproductive
-age women and adolescent girls and is associated with heavy menstrual periods, clotted flow, gastrointestinal symptoms, fertility problems, and a tremendous loss of quality of life.
Throughout the ancient and modern history of endometriosis, doc- tors and researchers have had different theories and opinions as to what causes it. Just recently we learned that endometriosis can be present at birth; it was found in some newborn fetal autopsies and was attributed to the fetuses’ exposure to elevated levels of maternal pregnancy hormones, namely estrogens and progesterones. The belief is that although a female may have endometriosis at birth, it doesn’t activate until her first men- strual period. I believe the disease can be inherited, as you will read about in the chapter on genetics. Many also believe, that the disease can be caused by retrograde menstruation. While this is a controversial view, my thirty years of clinical observation suggests that retrograde menstruation must play a triggering role in the development of endometriosis, par- ticularly through the gene material in the stem cells. It is likely that the disease may actually occur differently in different women, allowing for multiple hypotheses, which is why I offer the opinion of Dr. Harry Reich in Chapter 39. Research investigations have yet to provide clear answers. “Retrograde” means “moving backward.” Retrograde menstruation refers to a woman’s menstrual blood flowing back into her body during her period. Let me explain further. Ovulation—the hatching of eggs from the ovaries—occurs in a woman’s body each month. Fourteen days later, if there is no pregnancy, she has her menstrual period, during which her body naturally sheds the endometrium. If the menstrual flow proper- ly exits from her body, the flow carries the endometrium with it through the cervix, the opening of the uterus that connects to the vagina. The cervix is small, strong, and tight; it opens to allow menstrual blood out, but it also keeps a baby in the uterus for nine months. When the labor starts, uterine contractions dilate the cervix to allow the baby into the
vaginal canal for the birthing process.
If the menstrual flow does not exit as it should, the menstrual blood may leak back into the body through the natural openings in the fallopian tubes. Where does menstrual blood go? It implants in areas outside of the uterus in the pelvis and creates an abnormal growth of cells: endometriosis cells with inflammation. That’s not a good thing, and it may get worse. The body’s immune system desperately and futilely tries to eliminate these dis- located cells, which results in deeper inflammation with new blood vessels and stem cell activity resulting in deep and thick scar tissue. As a woman’s hormones (estrogen and progesterone) change during her menstrual cycle, the implants (which are also called lesions or nodules) respond to the hormonal fluctuations by growing. In other words, estrogen and progesterone are feeding the beast, serving as food for the implants. Unfortunately, unlike the endometrium that naturally leaves the body, there is no way for the implants to exit the body, so the inflammation continues.
This is endometriosis—menstrual periods that are literally stuck in- side of a woman’s body. The implants can grow deep and wide, spreading and clinging to her uterus, appendix, rectum, ovaries, intestines, leg nerves, and other parts of the pelvic region. They are like leeches that attach to, reproduce on, and grow on whatever internal organs they find. They are similar to a slow-growing cancer that invades the organs in the pelvis. In some rare cases, they can spread to the diaphragm, lungs, kid- neys, or brain.
The disease always causes inflammation, which can lead to adhe- sions, scarring, internal bleeding, bowel or urinary dysfunction, consti- pation, painful intercourse, and infertility. The physical pain can be un- bearable, which inevitably leads to psychological pain. A woman’s career may suffer. Relationships with loved ones may become strained. She may have to miss a lot of school, or even drop out. This disease threatens to become a woman’s identity, ruling every phase of her life.
Endometriosis, however, is a treatable disease. Some of my patients say that the deep-excision surgery I performed on them “cured” them. Although they may feel as though they are cured—because I was able to remove all their endometriosis and, as a result, transform their lives to the extent that they are pain-free and happier than they have been in many years—there is no guarantee that the disease won’t return at some point. The hope is that it won’t, but it could. Endometriosis is not like a bacterium you can eradicate with antibiotics or a virus you can prevent with immunization. It’s something that can continue to happen to some women’s bodies throughout their lives, and it needs to be recognized, diagnosed, and eradicated by excisional removal each time.
Whether one believes that the disease is curable or incurable, it is at the very least treatable through deep-excision surgery, and many women who undergo the surgery can reclaim their lives and live pain-free, which is a significant advancement from days of old.

Ready for a Consultation

Our endometriosis specialists are dedicated to providing patients with expert care. Whether you have been diagnosed or are looking to find a doctor, they are ready to help.

There aren’t enough stars for Seckin Endometriosis. They deserve 100/ 5. I want to make sure every woman right now who is looking for help, who is looking for a doctor and is scared and confused knows this is where you need to be. It doesn’t matter if you have to come from the other side of the United States or from the other side of the world, I can guarantee it will be worth it. Every member of their…

I’ve seen many obgyns over the years explaining my monthly symptoms during my period...but eventually it became a daily struggle with these pain. It feels like a poke here and there near my right pelvic region. I was given birth control pills for the past ten years but honestly, it didn’t help at all. I was in bed whenever I had my period. I was previously sent to GI doctors for possible appendicitis but it was ruled out from imagings…

Dr.Seckin is so much more than a surgeon. His passion for helping endometriosis sufferers and determination to improve the quality of life in all of his patients is undeniable. I remember when my gynecologist first told me I needed a laparoscopy. Her exact words were "I can do the surgery, but if you were MY daughter- I'd send you to him." From the first day I met him he took the time to explain endometriosis to me since I knew…

I was there for hysterectomy but then I found out that I also had endometriosis.My both surgeries went excellent and I feel great!.I am so thankful to Dr.Seckin and all his team for making my journey smooth!

I am a physician who suffered from deep infiltrative endometriosis. I needed laparoscopic surgery, so I went to see my former gynaecologist and he performed the procedure (a surgery which he supposedly does hundreds of times a year) last November. I had severe pain again when I had my period in January and was advised to go on taking a low hormone dose anticoncipient pill. My symptoms came back quickly and got worse in a few months’ time. I went…

After years of excessively painful periods, a serious loss of quality of life, and a series of uninformed and uninterested doctors, Dr. Seckin and Dr. Goldstein turned my life around. I was told I woke up from my surgery almost a year ago with a smile on my face, and I haven't stopped since. Before I heard of Dr. Seckin, I was experiencing almost daily terrible pain to the point where I had difficulty walking, inability to eat, inexplicable weight…

Dr Seckin and his team gave me back my life! Tomorrow will be 1 month since my surgery and I feel great. Dr. Seckin, Dr Liu, and Dr Goldstein are not only beyond words talented and amazing Doctors, but they are also genuinely wonderful and caring people. I cannot say enough great things about Holly, Asiye and Kim as well. They were all caring, kind, patient, and took the time to listen to me and explain anything I needed to…